“Love is our true destiny. We do not find the meaning of life by ourselves alone – we find it with another.” ~ Thomas Merton

OK, so I don’t think this will come as much of a surprise to anyone, but there’s been a little bit of concern from certain members of my family about how I was going to handle this week’s topic. And I actually can’t say that I blame them…I’ve been wondering quite a bit about it myself!

Fortunately, I remembered my Project Guidelines, specifically #5 to ‘Be Flexible’, so I decided that it was okay to let myself (and everyone else!) off the hook by keeping my experience with this particular ‘assignment’ to myself.

Hmmm – I think I can actually hear the collective sigh of relief from my entire family…my own being the loudest!

Anyway, as the week went along, every time I tried to think of what I was going to write about, the phrase ‘Make Love, Not War’ would pop into my head. And the more it popped into my head, the more I started to wonder who the first person was to actually say it. John Lennon? Some other 1960’s pacifist? 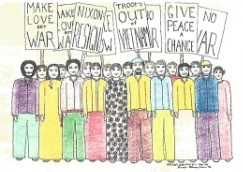 Well, when I searched the internet I was pretty surprised to find out that it didn’t come from anyone in the 1960’s at all!

According to Wikipedia, the phrase originated in 411 BC, when a Greek comic playwright, Aristophanes, wrote an antiwar comedy called ‘Lysistrata’.  The play was about a woman, Lysistrata (meaning ‘releaser of war’), who tried to rally the females of Greece to withhold sex from their husbands and lovers so that the men would stop killing each other in the violent Peloponnesian War they were all fighting in.

And the idea actually worked…the play ends with the men literally choosing to ‘make love, not war’. Wow!

Unfortunately, such a strategy is pretty much the opposite of what this week’s topic is suggesting. And I’m not totally sure that it’s ever that good of an idea to use sex as a bargaining chip anyway…even when it’s for something as important as peace.

But what I am sure of is that love, above everything else, is the best way to a more conscious and peaceful world…no matter how we choose to demonstrate it.

So whether you’re a 5th century woman trying to keep your husband alive, a 1960’s pacifist refusing to fight a war you don’t believe in, or simply someone like me,  a 54-year-old woman trying to raise her consciousness, the important thing is not how we demonstrate love, just that we do. Any way that we can. As often as we can.

Because clearly the world could use a little more love these days.

And even though John Lennon didn’t actually come up with the phrase himself, I still think he said it best when he wrote:

“Make love, not war. I know, you’ve heard it before…Love is the answer. And you know that it’s true.”

So maybe, hopefully, after centuries of trying to make it happen, 2012 will finally be the year that we all choose, both individually and collectively, to actually make love, and not war.

Because I truly believe that each one of us knows, deep down in our hearts, that love really is the answer.